THE WRONG SIDE OF THE BALL 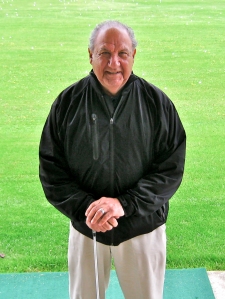 A Life in Golf

In the spring of 1967, 30-year-old Carl Unis came to Wisconsin to begin a new career as assistant professional at the Ozaukee Country Club in Mequon. Fresh on the heels of 18 memorable but largely unsuccessful months on the PGA Tour, Unis was looking to settle down. Big-time tournament golf was not on his radar screen.

His new boss had other ideas – and entered himself and Unis into the local U.S. Open qualifier at nearby Tripoli Country Club. Much to most everyone’s surprise (not the least of all, his own), Unis not only won the local qualifier, but went on to finish second at the sectional tournament, earning himself a spot in the 67th U.S. Open championship at famed Baltusrol Golf Club in Springfield, New Jersey.

Teeing off almost literally in the shadow of one of his boyhood idols, Ben Hogan (playing in his final U.S. Open that year), Unis continued his stellar play at the national championship. He not only made the cut, he led the entire Open field in driving distance. In the first year driving stats were recorded, he finished ahead of even the formidable Jack Nicklaus, the eventual tournament champion. His performance earned him a check for $655, the largest payday of his playing career.

Back in Wisconsin, the golfing world took notice. Suddenly, the new assistant pro was in big demand on the lesson tee. It didn’t take him long to realize that teaching was his true calling in golf, and by season’s end he had been accepted the job of head professional at Brynwood Country Club in Milwaukee. It was a position he would hold for the next 23 years.

In the years since that exciting week in New Jersey, Carl Unis has built a stellar reputation as a first-rate instructor, administrator, golfing ambassador, and “friend of golf” in the state of Wisconsin and beyond. Over the course of his 44-year teaching career, he has helped many hundreds of students – of all ages and skill levels – get more out of their golf games, both in terms of performance and enjoyment.

In the 1990s, he teamed with Channel 6 Sports reporter Tom Pipines (now the Sports Director at Fox6 Milwaukee) to produce a series of one-minute golf instructional spots called “Golf Tips with Carl Unis.” The popular segment aired during the station’s sportscasts from 1992-1994.

As a teacher and player, Unis believes that tension is the mortal enemy of the golf swing – and that good tempo, rhythm, and fluidity are its staunchest allies. He believes in “less effort, more power.” And he believes that practicing “until you get it right” is only the first step – because professionals practice “until they can’t get it wrong.”

As a husband, father, grandfather, mentor, and friend, he believes that while proficiency on the links can certainly make life more enjoyable, it is not the key to happiness.